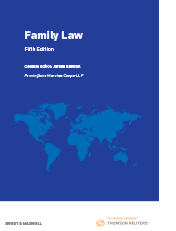 Rachael Kelsey and John West have contributed the Scottish Chapter to the 5th Edition of the Family Global Guide, published by Thomson Reuters, informally launched today. The Guide, known as the 'Blue Book', has grown in the last decade to become the world's market leading international family law comparison guide covering 56 different jurisdictions. In 2020 the online version was visited by over a quarter of a million visitors.

This is the first Edition that Rachael and John have been asked to contribute to, and comes on the back of the Scottish Chapter that they wrote for Thomson Reuters Global Guide to the International Relocation of Children. The Blue Book was launched informally at a meeting of the IAFL European Chapter- the first meeting since Rachael took over as President of the Chapter in December 2020.